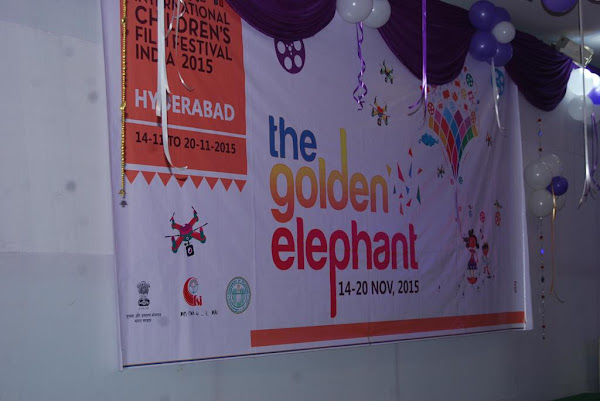 It is not just enough that you produce a children’s film for winning awards in festivals, but one has to give it a  360degree advantage  so that it reached the real beneficiary , the children across the globe  .

This was the message at an hour long   inaugural session of the ‘open forum at the 19th international children’s’ film festival of India underway at the Prasad’s Imax complex this evening.

Participants who included prominent children’s film producers, directors, and also actors emphasized on a 360Degree approach for the children films if the real purpose that it should be admired and adored by the children has to be achieved.

Ashish  Kulkarni, chairman of AVGV –FICCI who compeered the  open forum on the theme of  ‘ Evolving  Indian kids with 360 Degree approach

‘Sri Mukesh Khanna, the chairman of the CFSI stressed on the need for a strong character that helped children in building the moral fiber and that content should
be evolved from local themes and traditions. “Why not look to Mahabharata which has hundreds of fables that could go well in making numerous characters that will enthrall our kids ‘he said .


Confessing that he was an old guard and tradition Mukesh Khanna said he wanted films to be made for children awareness and personality building rather than for winning awards at Festivals.

He said CFSI is the only organisation which has made over 250 films since its inception in 1955.” But very few are made for the children in villages and many for only international festivals ‘ he lamented .

Mahish Agrawal, CEO of Nazara  games  said that  in todays world just production of films with good content was not just enough, but its presentation to the commercial market circuit, theaters, networks and also broadcasting circuits was very important  What   todays market needs is its packaging like comic books,DVD
–apparel-merchanidising and licensing etc.’What we did with Chota Bhim has to be repeated with most of other Indian productions for its success at the market and
further in the TV circuits.

Sameer Jain, co-founder of Green gold animations said that the market is huge for animations and children films, provided it is made available on apps and mobile.”

Today’s children are glued to not TV’s any more but to mobiles and apps .Hence if you target them you have to make  it available on mobile and also apps  savvy “.

Ms. Gabriele Brennen, a noted film director from France said   local content and local flavor was important in approaching social themes for children’s films. ”You cannot sell a movie with French or German locales in India as children would not understand the cultural nuances or even the basic of the region or the children of Shravan Kumar, the CEO of the CFSI said outreach has been a new concept of the modern day film marketing and needs to be the kept in mind by all film makers.

“Besides budget, the children’s film maker has also take note of the marketing, merchandising and also gaming aspects also” he added.

ISSUED BY THE COMMISSIONER OF I & PR, GOVT OF TELENGANA, HYDERABAD