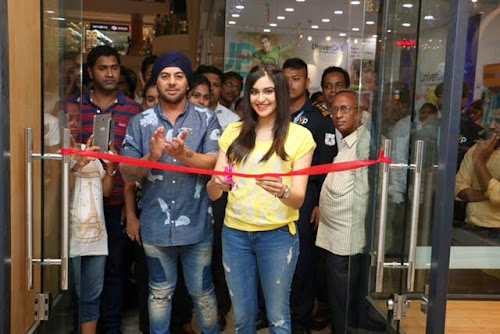 Adah sharma recently was spotted launching the Calvin Klein store in PVP square Vijaywada The actress who is in demand after the blockbuster success of Son of Satyamurthy and RanaVikrama is on a high.

The spokesperson of Calvin Klein said " adah has great fan following among youth after heart attack and now with son of satyamurthy. She has had back to back successes and she will be lucky for us. Calvin Klein mostly caters to college crowd and adah is perfect for the target customers. So much crowd has gathered from morning here just to see her.

The actress will next be seen in garam opposite Aadi. Harish shankar announced on twitter that the actress will play a very important role in his movie Subramaniam for sale.The actress currently shooting for a Hindi film is tight lipped but she has signed 2 more telugu films. Looks like a very busy year for this rising star