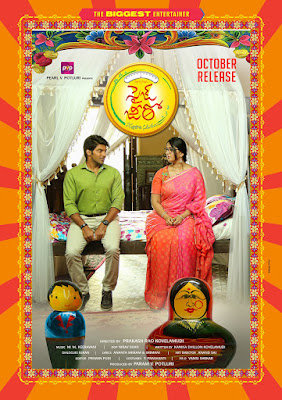 The BIGgest entertainer, with an obvious pun on the word BIG, PVP Cinema has released the first look poster of its forthcoming RomCom, “SIZE ZERO”. Going by the images in the first look poster everything about this movie looks BIG. Anushka is BIG in size, Arya is BIG on charm and the technical crew has BIG names like MM Keeravani and Nirav Shah. Adding up to the BIG quotient, the Producer PVP Cinema has planned a BIG release across the world in multiple languages in India and overseas. Going by the plans to release Size Zero in 1500 screens, everything about this movie is surely BIG. Looking at the tag of the BIGgest entertainer, there is ample scope for entertainment with a large sized heroine.

Starring Arya, Anushka Shetty, Sonal Chauhan, Prakash Raj, Urvashi, Bharat and others, Size Zero is all set for a global release on OCTOBER 2nd, 2015, on the occasion of Gandhi Jayanthi.

Sources from the production house have revealed that the music by Keeravani is sure to be a chartbuster. With the exciting announcement of the movie release on the 2nd of OCTOBER, the countdown has well and truly begun for The BIGgest Entertainer Size Zero.