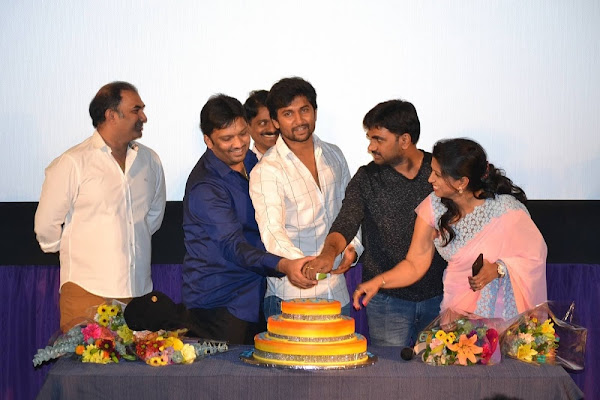 It was a moment of glory and joy as a huge crowd of movie lovers thronged the venue of 'భలే భలే మగాడివోయ్' (Bhale Bhale Magadivoi) celebration in USA as star Nani, director Maruthi and one of the producer Vamsi from UV Creations along with Cinegalaxy team, Sanjay & Madhu Garlapati, when they were in Los Angeles, California to celebrate the phenomenal success of the film here.

It is not every day that a medium size film grosses $1.3 million and yet goes strong. And Nani, being the friendly, cheerful person he is, used the opportunity to give his fans overseas a gala time. With a smile on his face, he posed for photos with everyone in attendance and ensured no one left disappointed. In a Q&A session, Nani cracked people up and even shared some interesting anecdotes from his life and the film sets. The actor expressed gratitude for the immense love shown by people in the form. Of the film's successful run. After cutting a cake and joining the audience in watching the movie for a while, the actor sure impressed his fans in the US. We just hope he tastes success often now!

Meanwhile, it is director Maruthi who will cherish this trip forever. While the film's success is a reason for sure, the fact that this is his first trip to the US is another! We wish him more success in all his future

BBM & CineGalaxy team would like to mention special thanks to Vijayakumar Vattikuti, Kiran Muppavarapu, Nandan Kumar Potluri and Suresh Babu Aynampudi, for help and their support in arranging this event in a grand manner and made this event successful.