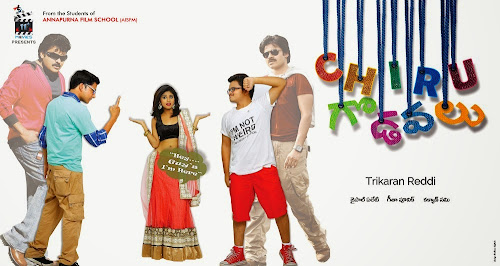 Annapurna film school students made a movie without creating much buzz in the market but their creativity was apparent from every action at their movies’ first event- “First Look” Based on thorough planning, enthusiasm and energy at the function I am strongly convinced that success is not far for them, another few weeks and they will make their presence felt in Tollywood.

Director – Trikaran Reddi and his team of few more students of Annapurna school unveiled the first look of their first production called CHIRU GODAVALLU. At the time of first look launch director Trikaran Reddi mentioned explicitly that this is the first feature film made by Annapuna film school students.

Executive Producer Achyut Chopade mentioned that movie is a fun filled youth oriented rom – com drama. To enjoy this movie CHIRU GODAVALLU either you should be young or young at heart.

Casting Director Ravikiran Choudhary mentioned that 11 plus movies looked at more than 1 lakh profiles to choose the right talent.

Maheshwar Reddy, the production designer said that the actors are very charming in this movie and added that the audience will get enthralled by their screen presence.

The Art director Srinivas M mentioned that the costumes are trendy and colorful and he thanked the costume designer Shilpa Sevella.

Assistant director Abhiram expressed his appreciation for Mr. Sathya of “The Endless Digital” for their innovative poster designs