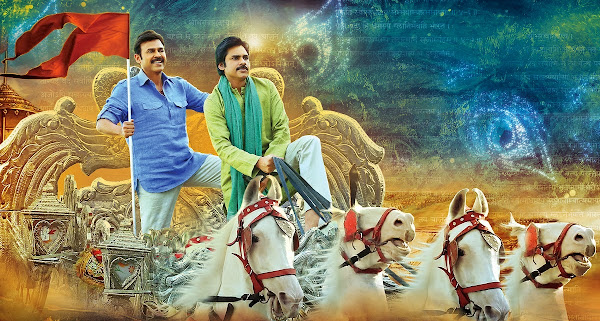 The song 'Bhaje Bhaje' from 'Gopala Gopala' has rocked all the music charts in just a couple of days. It has generated so much excitement amongst the Pawan Kalyan and Venkatesh fans, that the power packed Music Release Event on the 4th of January is surely going to create mega entertainment.

The songs from 'Gopala Gopala' composed by romance king Anup Rubens, performed by the eclectic Kailash Kher, the mellifluous Sonu Nigam, and the melodious Haricharan, beautifully penned by Sitaram Shastry, Chandra Bose and Ananth Sriram promise to delight not only Venkatesh and Power Star fans but all music lovers alike.

A power packed event is being designed by team 'Gopala Gopala' for the Music Launch. And as expected by millions of his fans, the highlight of the evening is undoubtedly the charismatic, charming and graceful PK, aka Pawan Kalyan, aka Power Star.

So welcoming the New Year with a bang, 'Gopala Gopala' promises to be one unstoppable joy ride for all Telugu Film Lovers.