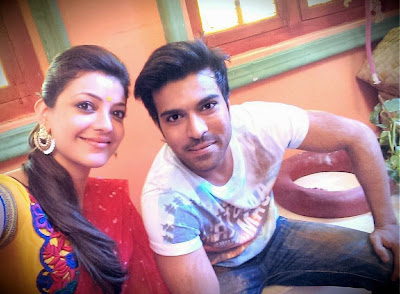 Mega Powerstar Ram Charan playing the lead role in the upcoming film Govindudu Andarivadele is busy with its shoot in Ramanaidu Studios, Nanakramguda.

Present schedule of shoot will be wrapped up shortly and a fresh schedule will commence in Pollachi from July 13 to July 23rd where key scenes to be picturised. Kajal Agarwal is playing Ram Charan's love interest in the film.

Krishna Vamsi is helming megaphone for Govindudu Andarivadele film. Sameer Reddy is crancking the camera while musical scores are by Yuvan Shankar Raja. Bandla Ganesh Babu is producing of this family entertainer.