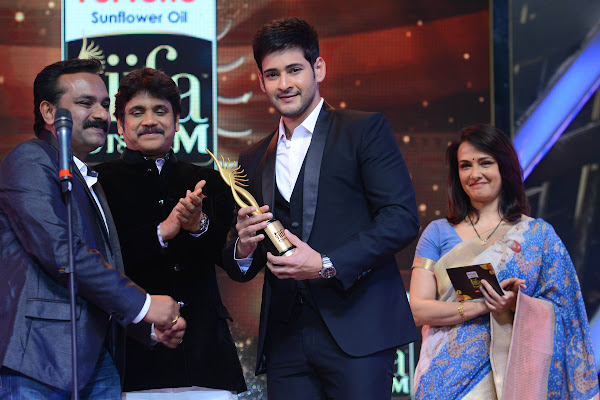 Hyderabad, January 26, 2016: The biggest celebration of South Indian cinema, the Fortune Sunflower Oil IIFA UTSAVAM co-powered by GIONEE smartphone and Renault- Passion for Life was a splendid event that witnessed the coming together of the biggest superstars of the Telugu and Kannada Film Industries on 25th January 2016. With some of the year’s biggest films taking home the prestigious awards, the evening came alive as some of the most prolific names in the South Indian film industry came together to revel in the success of Telugu and Kannada Cinema in 2015.

The evening also saw some incredible performances by superstars Tamannaah,Akhil Akkineni, Ram Charan and Shivraj. Prabhudeva and Shriya Saran alsoheld the audience spell-bound with a stunning performance and lit the stage on fire with some incredible moves.

Nirup Bhandari, Actor,commented “I would like to thank IIFA UTSAVAM to have instituted this fantastic opportunity for the whole of South Indian Film Fraternity to be under one roof. It felt great to watch legends and new talents from the industry honored. Being in the presence of such powerhouse of talents was a huge high”

Charmi Kaur, Actress said “IIFA UTSAVAM has truly created a momentous occasion by putting up a spectacular show and uniting the whole of South Indian film industry on the prestigious global platform of IIFA. The decision to hold this grand event as a fundraiser is also commendable. I am already looking forward to being a part of the next IIFA Utsavam.”

Mr. Angshu Mallick, COO, Adani Wilmar Ltd, commented on sponsoring the event, “Adani Wilmar Ltd. is one of India’s fastest growing food company with a turnover of more than 3 billion USD. Fortune – India’s No 1 edible oil brand, is proud to associate and present IIFA Utsavam. We have chosen Fortune Sunflower Oil, one of our most prominent brands in the South Indian market to bring forth this partnership. With our wide range of product portfolio of edible oils, basmati rice, pulses, soya chunks & besan, we look forward to being the preferred brand of every South Indian consumer by reaching out with an array of celebrity engagements as a result of our partnership with IIFA Utsavam. With the legacy of IIFA in the Indian entertainment space, we proudly look forward to the best entertainment extravaganza south of India is going to witness."

Arvind Vora, Country MD and CEO, Gionee India, commented “Gionee is proud to be associated with IIFA Utsavam, which is a great platform to recognize the efforts of the film industry who have put in their efforts to entertain audiences in the country and the Southern part of the country in particular. Cinema as a medium cuts across our consumer base and this platform is a great place to connect with our consumers”

Speaking on the association, Mr. Rafael Treguer, Vice President, Sales and Marketing, Renault India said, “Renault has entered a new phase of growth in India, powered by our product offensive strategy. Our brand celebrates ‘Passion for Life’, which is reflected in all the platforms we partner with. IIFA Utsavam, celebrates the prestige and glory of South Indian Cinema, by felicitating and recognizing superlative achievers and their triumphs. We are proud to be associated with this platform, as it reflects Renault’s passion for celebrating life with elements of culture, entertainment, films and music.”

S.J. Clement, Network Programming Head, Sun TV Network commented, “Sun TV Network is proud to be associated with the Premiere edition of IIFA Utsavam 2015, a pioneering event that will present the finest among the South Indian film fraternity. Sun TV Network reaches around 58 million households in the country. Increasingly, our programming is being accessed by the South Indian diaspora across the globe. We believe in delivering consistently high quality entertainment through our unrelenting focus on premium content. Our collaboration with IIFA reiterates our commitment to be at the leading edge of broadcast media industry. Sun TV Network will be the official broadcast partner of the IIFA Utsavam event and shall telecast the Red Carpet and Nomination episodes on its flagship channels Sun TV, Gemini TV, Udaya TV and Surya TV on Jan 3, 2016. The finale of the event will be awards ceremony with star studded performances, which will be telecast on Jan 10, 2016.”

Andre Timmins,Director, Wizcraft International Entertainment said, “We are thrilled at the phenomenal success of the very first edition of IIFA Utsavam. There have been a lot of challenged we have had to overcome including the tragedy in Chennai. We are honored to be able to help the city of Chennai get back on its feet through IIFA Utsavam. It is an honor to felicitate so many deserving individuals on their talent and hard work in the year gone by and we wish all the winners tonight the very best.”

The Fortune Sunflower Oil IIFA UTSAVAM will be telecasted on Sun Network.