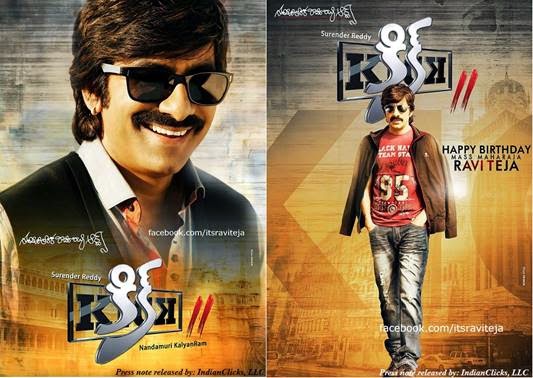 The film is directed by creative and unique director Surender reddy who’s last movie RACEGURRAM was a sensational blockbuster in India and Overseas. The Movie is produced by Kalyan Ram Nandamuri under his prestigious home banner NTR Art Productions banner. The story is provided by sensational writer Vakkantham Vamsi who has provided story for NTR’S latest hit TEMPER.

The Same trio, Director (Surender Reddy), Writer (Vakkantham Vamsi), Hero Ravi Teja Worked for KICK which was a box office hit and a trendsetter way back in 2009. The film is the story of the son of the lead pair of Kick Movie.

Recently released first look teaser has garnered positive response from the critics, fans and the general movie goers. This colorful teaser raised everyone’s expectations tremendously and everyone is waiting for a kick full entertainer this Summer.

Ravi Kishan was selected for a negative role, marking his second film in Tollywood industry with, director Surender Reddy again after Race Gurram. Kabir Duhan Singh who was the main villain in recent hit Jill was also signed in for another villain role who acts as a son to Ravi Kishan in the movie.

Thaman who provided music to many blockbusters of Ravi Teja is ready to bounce back with a peppy album soon.

Audio of the movie is expected to release in third week of April and movie is set to ring the box office in May 2015.

Classics Entertainments is thankful to producer Kalyan Ram Nandamuri, Hari Garu for giving us this wonderful opportunity to bring this Movie to overseas.