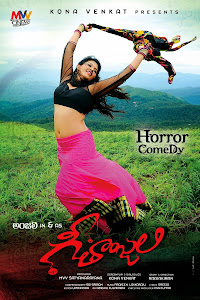 Few days back there was a buzz started in film nagar that Kajal Agarwal is doing an item song in Raaja Kiran directorial upcoming horror-comedy genre film Geethanjali.

Responding to the news Kajal Agarwal denies of doing any item song right now by updating her fb page with the following status message "If I ever do a special song for a movie, you guys will be the first to know,Till then.. Don't believe everything that you read!Busy with Govindudu Andarivadele shoot for now"