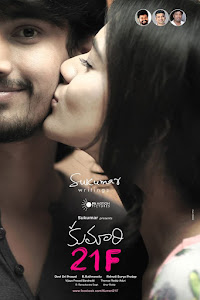 Kumari 21 F is being directed by Palnati Surya Pratap and musical scores are by Devi Sri Prasad. A single video track from this romantic youthful entertainer to be released in this week on the occasion of Vinayaka Chaturthi.

Noel Sean, Naveen, Sudarshan, Hema, Kamal, Aravind, Giridhar, Thagubothu Ramesh and others are playing prominent roles. R.Rathnavelu is crancking the camera while Story,Screenplay and Dialogues are by Sukumar. Vijaya Prasad Bandreddi, Thomas Reddy Aduri are producers of the movie.