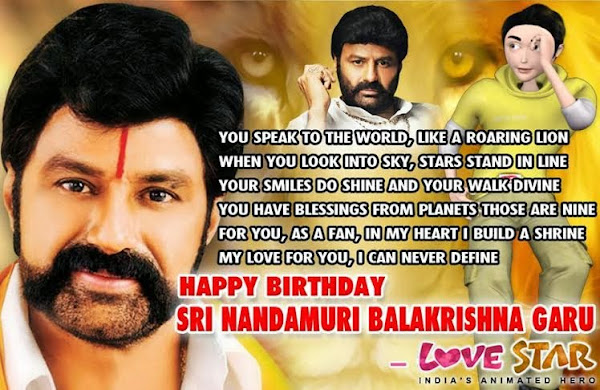 Nandamuri Balakrishna has been receiving many birthday wishes from many corners of the nation since this morning but interestingly he also received the wishes from an animated character this year. The character is Love Star, designed and developed by a Hyderabad based company 7 Seas Technologies. The promotion of Love Star has been done on social networking sites innovatively, by making the Love Star image wishing various celebrities. So far Love Star wished Narendra Modi on his success, Naveen Patnaik for becoming the CM of Odisha, Shah Rukh Khan for standing second richest among film stars in the world and Rajni Kanth for coming up in animated form as Kochaidayaan.

Today he wished Nandamuri Balakrishna, with an interesting poem. It goes like this:

"You speak to the world, like a roaring lion
When you look into sky, stars stand in line
Your smiles do shine and your walk divine
You have blessings from planets those are nine
For you, as a fan, in my heart I build a shrine
My love for you, I can never define

Maruti Shanker of 7 Seas Technologies says, "We are coming up with a dancing video of Love Star where he imitates all the star heroes of Indian Cinema. We are doing it to entertain internet crowds. We are releasing it in a month or two".