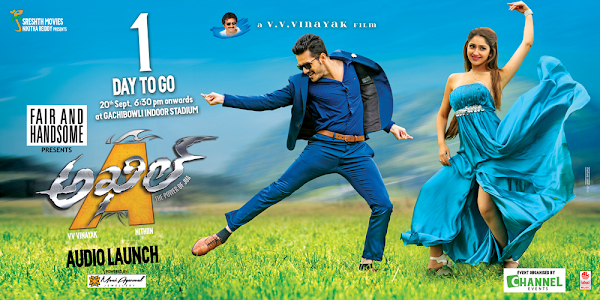 The audio launch of Akhil Akkineni's AKHIL is expected to be nothing short of amazing. Now it is a matter of immense pleasure that the audio launch of 'King' Nagarjuna's heir Akhil's acting debut is being graced by none other than Superstar Mahesh Babu, who is the heart-throb of Telugaites world-over.

Come September 20, Gachibowli Indoor Stadium will see a record number of fans turn up for the event, which boasts of state-of-the-art technology like LED Lighting and features scintillating performances by  top choreographers. If there's one thing to be said, it will be an event like never before in Telugu Film Industry!

Sreshth Movies being spearheaded by Hero Nithiin have put immense faith in the potential of Channel Events, need to be thanked first and foremost. The media are also to be thanked here, for their tremendous support in the promotion for this grand event. Channel Events, under the able leadership of Viswa and Sridhar, are looking forward to doing many more such events in Telugu Cinema. Their expertise and experience in the media industry make them just the right choice to handle such big-
budget extravaganzas!

The Audio Rights have been grabbed by Lahari Music for a fancy price. The event is being sponsored by Fair and Handsome; this is the National Brand's entry into Telugu Cinema, who have never associated with any Telugu movie before for their branding. Channel Events are proud to be associated with a brand with such huge market presence and respect as them.

Also, it should be mentioned that as it is a pass-only event, it is sincerely requested that only those invited turn up at the venue. The others can enjoy the audio launch from the comfort of their homes, exclusively on TV5.