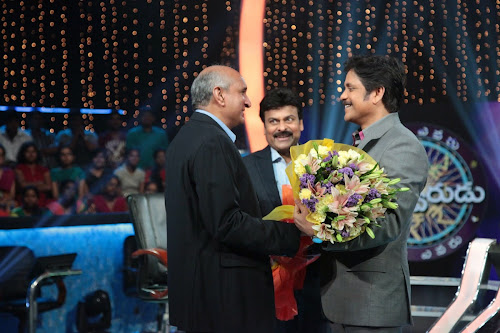 Meelo Evaru Koteeswarudu (MEK), the game show that has been enthralling the audience like never before in the history of Telugu Television, is all set to offer another visual treat to the viewers with Tollywood Megastar Chiranjeevi gracing the 40th episode of the show as the guest, along with the host Nagarjuna Akkineni.

It is a rare occasion where both of them have come together exclusively on a television screen. The 40th episode of MEK will telecast at 9.00 PM on 7th August (Thursday) on MAA TV, the No.1 Telugu General Entertainment Channel (GEC). It will mark the closing of the first season of the game show. MEK holds a promise to come back soon for the second season keeping the audience interest in view.

Though the format of the game show is popular in India as Kaun Banega Crorpatii (KBC), the MEK game show hosted by MAA TV has created history by showcasing the aspirations of the common men and reflecting the life experiences of the people who have come up in a hard way in the life.

The MEK game show on MAA TV has well connected with the audience across all age groups and socio-economic segments of the Telugu society in India and abroad.

MEK has taken a shape with the visionary thinking of MAA TV Chairman Nimmagadda Prasad, who emphasized on making a social impact through this game show on MAA TV. The game show took the Telugu TV entertainment space to the next level with a good meaning and purpose. After careful assessment of various formats, MEK game show was adopted as it will be a life changer for several people. True to the belief, several heart touching life stories have come into light and MEK became a source of inspiration for common men.

Successfully leveraging the strengths of the game show format, MAA TV platform and Nagarjuna's image and acceptance, MEK has received excellent response with 11 lakh people showing interest to participate in the game show. Reputed international audit firm Ernst & Young (EY) has supervised the back end process of selection & auditions, while Big Synergy has produced the show for 40 episodes.

MEK, which commenced on 9th June, reached 1.38 crore people in urban Andhra Pradesh and Telangana, out of the total TV viewing universe of 1.74 Crore as per TAM monitoring, and it is one of the highest reach for any TV program.

The Telugu TV audience is all set to watch the culmination of the success of the MEK first season at 9.00 PM on 7th August.