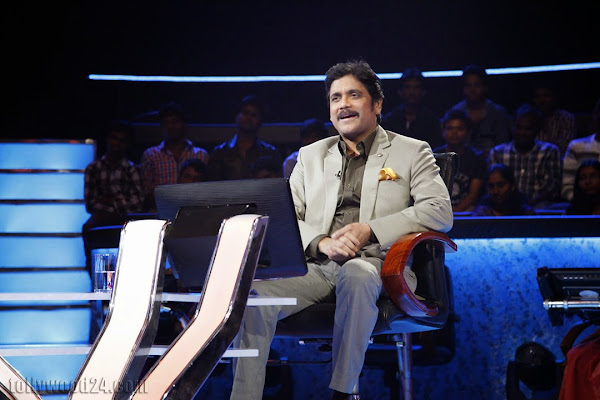 For the Call for Entry (CFE) conducted between 24th April to May 1st to select the contestants, more than 1 million viewers sent SMSs, expressing their interest to participate in the game show

Of the 1 million plus responses, about 1500 were short-listed through randomization process by a 3rd party agency with a fool-proof process audit by E&Y audit firm.

With auditions in Vijayawada, Tirupathi and Hyderabad, about 100 participants were selected to play the game with Nagarjuna
Nagarjuna is hosting a show on a TV for the 1st time

In the 6 episodes that were shot so far, 9 contestants took the hot seat and a few of them are truly heart touching stories.

Every contestant's back-end story has been recorded and addressed in the show..  It will be a life changer for most of the contestants who make it to the hot seat.

The prize money is from Rs. 1,000  to Rs. 1 Crore and the rules are the same like the KBC.  Those who answer all the 15 questions correctly will get Rs. 1 Crore prize

The International Format tasted success worldwide in more than 150 countries, and 7 languages in India including Hindi

Big Synergy, which is headed by the well known quiz master Siddhartha Basu, is producing the show

Maa TV, which is known for programming innovation based on the understanding of Telugu viewers' preferences, is now taking the Telugu television to the next level with MEK, both in terms of quality of content and host presence. Nagarjuna known for his out of box thinking and being ahead of times in style and substance is the first big host after Amitabh to be doing this show .

MEK brings out all the human emotion, drama and intrigue that is required for any show on television.  It's the reality show which can only be real as everything is transparent right from the selection of questions to selection of contestants ..

The entire process of MEK is monitored and audited by EY, the prestigious global audit firm.