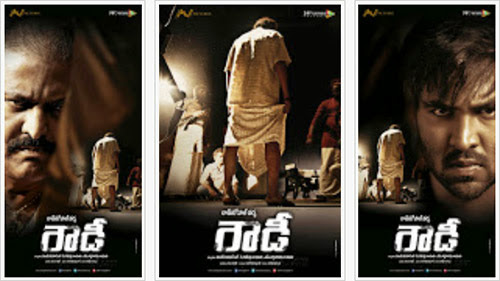 Actor Mohan Babu will be seen in his natural avatar in RGVs forthcoming big action film ‘Rowdy’ sporting his real look without toupee and with rugged good looks. The power packed team behind the movie says the intensity of this film is sure to freeze you this summer.

The first look of the film released today reveals little about the movie, aside from the novel look of Dr. Mohan Babu’s take on the character, and the fact that as a Hero he is extremely dominating even today.

Releasing the first look Dr. Mohan Babu said every scene and my look in the film Rowdy has been an amazing experience. It's a big, live-action, fully articulated stunts piece, which takes RGV action drama film to a whole new level.

This film also marks the return of Dr. Mohan Babu and Jayasudha to the big screen after more than a decade. T he two immensely talented, super hit movie Jodi having appeared in a large number of high-grossing films past many years is expected to keep their track record even today .

Producers of the film Parthasarathy, Gajendra and Vijaykumar of AV Pictures say that the film Rowdy impact is expected to be even bigger than Mohan Babu hit film Peddarayadu and Rayalaseema Ramana Chowdary that created huge frenzy in the film circles and among the movie followers.

Vishnu Manchu and Shanvi intriguing role in the film will double up the spice even more says the film makers. The movie shooting is going ahead at a brisk pace with most of the top action sequences and song picturisation already canned.

The music for the film scored by Sai Karthik is tuned to be a sure fire rocker. And, you would never want to miss watching Rowdy in which music and movie move in perfect harmony.

Watch out! The filmmakers have designed a unique promotion campaign for the film has loads of surprise elements which will soon be unveiled one after another.