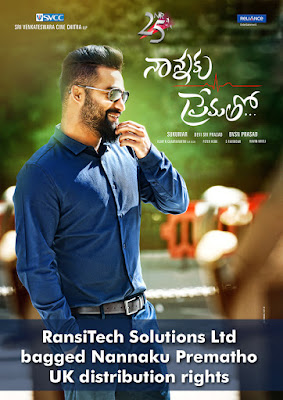 RansiTech Solutions Ltd – a new entrant into the overseas cinema distribution market – is making its debut with Young Tiger NTR-starrer ‘Nannaku Prematho’ for which they have bagged the distribution rights across the UK. Helmed by numero uno director Sukumar, the film is touted to be a pakka family entertainer which will show NTR in his stylish best!

While the fresh combo of NTR and Sukumar is the film’s biggest selling point, the teaming up of Rakul Preet Singh (the present Tollywood sensation) along with the duo is one reason the film is the most awaited release this season. Not just in the film’s trade circles but also amongst the public, the film is generating a great deal of buzz thanks to NTR’s new, oh-so-hot look for this flick.

The actor’s look in the film as seen in the first has been the talking point so far! But not just that, the actor is said to have delivered a performance – his best yet – which is going to be the USP of ‘Nannaku Prematho’.

Director Sukumar is going to be back with the avant-garde in terms of both the content and presentation, but what will be the added asset is that the content is not just new but also extremely tasteful and entertaining.

With an abled supporting cast of Rajendra Prasad, Jagapathi Babu amongst several other renowned faces, this film is the going to be NTR’s biggest release yet. Having shot for major portions of the film in the UK, the film’s team will soon begin shooting at the idyllic locations of Spain.

Team RansiTech is glad to be associated with this project gearing up for a worldwide release on January 8, 2016 as a Sankrathi treat and will have premiers on January 7.

The teaser released earlier is also proof that the film is something that will be a perfect treat for the festive season.

We want to thank Sanjay (CineGalaxy Inc.), producers BVSN Prasad and Bapineedu, director Sukumar and most importantly NTR for giving us the chance to begin our innings with this prestigious project.