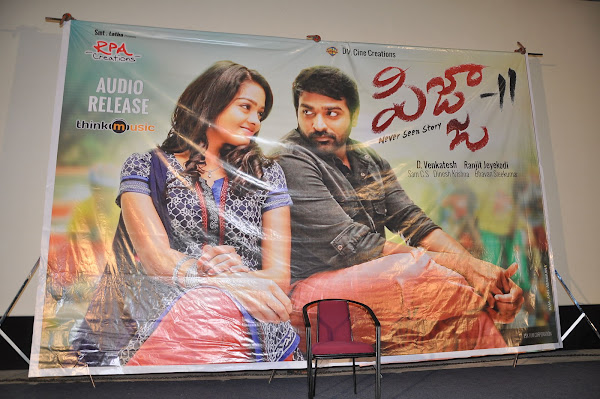 Films with strong content and racy script will always wins the heart of Audience by breaking the linguistic borders. The level of interest and enthusiasm shown by the Telugu Audience for the upcoming Vijay Sethupathi - Gayathrie starrer Puriyaatha Puthir will act as a better example for that. The film was titled as 'Pizza 2' for Telugu Version, and a grand music launch  happened for the same on 27th November (Sunday) in Hyderabad, which  witnessed the presence of Tamma Reddy Bharatwas, Bellamkonda Suresh, SVR Media Sobharani,  Music director Mantra Anand and Malkapuram Shiva Kumar. The telugu theatrical rights of 'Pizza 2' (Puriyaatha Puthir) was bagged by D Venkatesh under the banner DV Cine Creations and the film is released by Maruthi and Sudarshan Reddy in joint association with J Satish Kumar of JSK Film Corporation. The Audio, released by J Satish Kumar of JSK Film Corporation has been received by Bellamkonda Suresh.

"Good contents make good business....Our 'Puriyaatha Puthir' aka 'Pizza 2' is a better example for that. We, as a production and distribution house proudly say that our Telugu Audience are showing up more interest on Tamil Films that has a strong script. We are very much happy to fulfill their expectations completely through Pizza 2...." says D Venkatesh of DV Cine Creations.