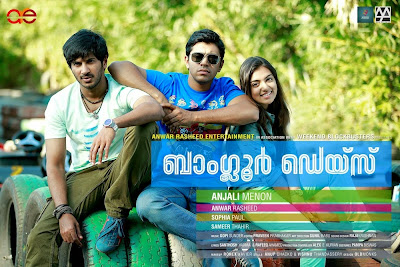 Taking the tinsel world by surprise, PVP Cinema and Dil Raju have jointly acquired the remake rights of Bangalore Days for all Indian languages. Directed by Anjali Menon and produced by Anwar Rasheed, Bangalore Days has created a huge sensation not just in the Kerala film industry but also across the nation.

Dwelling on emotions like friendship, relationship and commitment, Bangalore Days has managed to tug the heart strings of viewers across the nation (the sub-titled version was released in a significantly higher number of screens outside Kerala than within Kerala).

Boasting adream ensemble cast of the Young Brigade of Malayalam cinema represented by Dulquer, Fahad, Nivin and Nazriya, Bangalore Days has connected immensely with audiences across all age groups and establisheditself as one of the all-time blockbusters of Malayalam cinema.

Whilethe movie is making waves at the box-office, here comes the sensationalnews that PVP Cinema and Dil Raju have partnered to acquire the rights and remake it in Telugu, Tamil and Hindi. PVP Cinema is one of the leading corporate houses with a significant presence in both the Telugu and Tamil film industries.

Dil Raju is the man with the midas touch and he is a leading exhibitor, distributor and producer in the Telugu film industry. With a strong belief in the content, in a path-breaking move, two of the leading lights in the media and entertainment space have joined forces to remake a highly successful movie in all the three main languages of the Indian film industry.

Bhaskaran,who has written and directed trend setting blockbusters like the Teluguversion of Santosh Subramaniam (Bommarillu) will be marking his directorial debut in Tamil and has been entrusted with the job of directing both the versions. Discussions are at a very advanced stage with three leading heroes and heroines to replicate the roles in both Tamil and Telugu.