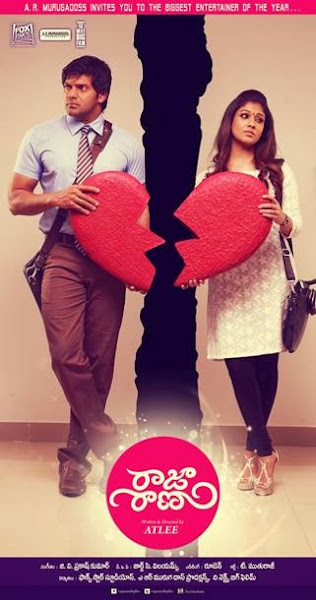 Distribution and Production giant Fox Star Studios and ace film maker and producer A R Murugadoss' blockbuster, Raja Rani (Telugu) will release in March 2013. Produced in association with The Next Big Film Venture and directed by Atlee, the film toplines a stellar ensemble cast led by Nayanthara, Arya and featuring Jai , Nazriya, Santhanam and Sathyaraj making it one of the most awaited films of the year.

The film has already grossed more than 55 Crores in its Tamil version & is the biggest Romantic Comedy film of the past decade in Tamil Nadu. Having captured the hearts of audiences in Tamil Nadu & Kerala, the film is set to capture the space of the biggest family entertainer of the year in Andhra Pradesh too.

A R Murugadoss who along with Fox Star Studios, has given two break away hits including Journey (Engaeyum Eppothum) in 2011, is looking forward to sharing the film with the cinema lovers, " Raja Rani is one of those romantic films that will warm your heart while being a fun ride all the way. It's got great performances and together with Fox Star Studios, we are eagerly waiting to see the feedback of the audiences. "

Vijay Singh, CEO, Fox Star Studios, adds, " Raja Rani is our third film with A R Murugadoss. While we are taking our relationship with him to Hindi cinema as well, I can vouch that with Raja Rani we have created a film that will entertain everyone. It has one of the best musical scores coming out in recent times and I am confident that audiences will endorse Raja Rani's love story whole heartedly!"

Raja Rani will have a wide release in Andhra Pradesh & rest of India through the distribution might of Fox Star Studios. So get ready to witness a love story- King size and Queen size!