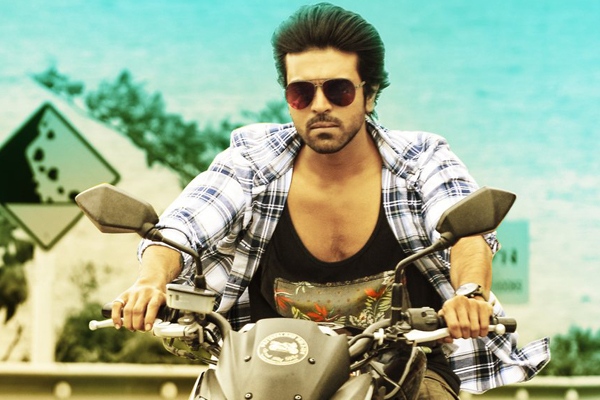 First Look stills of Mega Power Star Ram Charan and Super Director Srinu Vytla's film have been released on the eve of Mega Star Chiranjeevi's 60th Birthday, The film is being produced by Danayya DVV, under the banner of DVV Entertainments. The regular shooting is going on continuously and the film is going to a Dussehra gift for all the fans.

Producer Danayya DVV said "I am ecstatic as Megastar is making a special appearance in our banner and that too in our own Megapowerstar Ram Charan's film. Though he is in the film briefly, i am sure his appearance will be vibrating through out." . First look and teaser to be released on the occasion of Megastar chiranjeevi's birth day.

Kona Venkat and Gopimohan are penning this Action - Entertainer with Sreenu Vaitla. Rakul Preet Singh is pairing up with Mega Power Star Ram Charan for the first time in this film. SS Thaman is composing the music while Manoj Paramahamsa is handling Cinematography.