SIIMA 2015 is all set to enthral Dubai 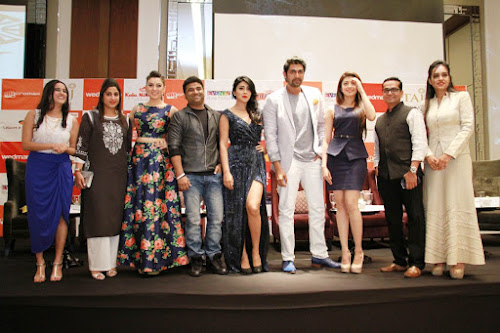 Chennai, May 28, 2015-Micromax South Indian International Movie Awards (SIIMA) the most awaited Film Awards of South India is back with a bang. Micromax SIIMA enjoys the highest popularity in South India with over 45% of South Indian TV Viewers watching the award ceremony every year.

The nomination process of the movie awards is executed by a panel of veteran judges from Tamil, Telugu, Kannada and Malayalam industries, followed by online voting for the final verdict of winner selections.

With all the glitz and glamour bundled, this year Micromax SIIMA announced to host its 4thedition of awards on the 6th and 7th of August at the Dubai World Trade Centre, Sheikh Zayed Rd , Dubai with Micromax returning as the title sponsor. Quoting further about Micromax SIIMA 2015, Brinda Prasad, Chairman of SIIMA stated, “This year, SIIMA is back in Dubai and we are looking forward to a grand night that will only get Bigger and Better with over 20 stars performing over 2 days in Dubai. Micromax is a symbolic brand and our association with the brand will yet again take this event to the next level. I look forward to this new journey.”

A destination brimming of history, culture and development, Dubai has been a welcoming city to SIIMA, with majority Indian population who revel in the journey of Entertainment, Thrill and Electrifying Performances that SIIMA offers to its audiences.

Kick starting this year’s Micromax SIIMA Celebrations we have joined hands with IVEDE, a Malayalam crime and drama thriller to Host its premiere in Dubai with the star cast- Prithviraj Sukumaran, Nivin Pauly and Bhavana. Speaking about the Premier, Prithviraj quoted, “I am excited about the premier of Ivede happening in Dubai. SIIMA believes in taking the South Indian Film Industry globally and it gives us immense pleasure to be associated with the event. Also, Dubai has always been a great market for South Indian Movies and I would love to see the movie response with our Dubai audience”

Speaking on this occasion, Mr. Shubhajit Sen, Chief Marketing Officer- Micromax Informatics said “Micromax is proud to partner with SIIMA which has been a part of the magical journey of South Indian Cinema. Being an iconic youth brand, we have been consistently connecting Indians to their passions and nothing, not even cricket, evokes as much engagement as movies. I would like to thank all the members of the organizing committee for their effort of bringing together best talent in the industry and felicitate their notable contribution to South Indian cinema.”

Additionally, the Press Meet witnessed representation from the South film industries with Rana Daggubati, Shriya Saran, Pranitha Subhash and Yash, gracing the conference. Sharing their experiences, Shriya Saran stated, “To be representing the South Film Industry Globally, is both a responsibility and a privilege and Micromax SIIMA is just the right platform to be a part of. I am now eagerly looking forward to the awards ceremony in Dubai”

Setting new heights, Micromax SIIMA is now all geared up for its 4th edition of Entertainment chapter with two days of unlimited Dance, Drama, Celebration and Laughter riots coming the Dubai Way. With the stage and red carpet all set for the star studded night of Celebrated Awards, Sensational Performances, Glamour and more, its time Dubai embraces itself for an entertaining experience of its sorts.

Micromax Informatics Limited is one of the leading consumer electronics company in India and the 10th largest mobile phone player in the world Counterpoint Research. Over the past 5 years, Micromax has pioneered the democratization of technology for masses by offering affordable innovations through their product offerings and removing barriers for large scale adoption of advanced technologies. Micromax is currently the largest mobile vendor in India with a market share of 22 percent in Q3 of 2014 Canalys Report. The brand’s product portfolio embraces more than 60 models today, ranging from feature rich, dual – SIM phones, 3G Android smartphones, tablets, LED televisions and data cards. The company also has many firsts to its credit when it comes to the mobile handset market including the 30-day battery backup, dual SIM phones, QWERTY keypads, universal remote control mobile phones, first quad-core budget smart phone etc. The company has its operations across Russia and SAARC markets. Micromax sells more than 3 million Mobility Devices every month, with a presence in more than 560 districts through 1, 30,000 retail outlets in India. With presence across India and global presence in Russia and SAARC markets, the Indian brand is reaching out to the global frontier with innovative products that challenge the status quo that Innovation comes with a price.