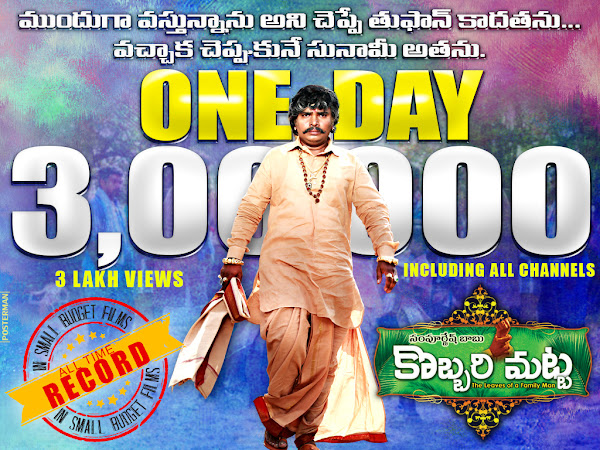 Burning Star Sampoornesh Babu stunned one and all with non-stop breathless dialogue in teaser of his next entertainer Kobbari Matta. Sampoo in Pedarayudu getup is seen delivering funny punch dialogues about feminism in serious mode.

Mega hero Sai Dharam Tej unveiled the teaser and Sampoo uttered the same lengthy and hilarious dialogue on the stage.

The world’s largest teaser has created storm in Youtube with record views. It took just 9 hours for Kobbari Matta teaser to cross Hrudaya Kaleyam YouTube records and reach 1 lakh views. In about 15 hours, the teaser gonna cross 2 lakh views which is all time record for Sampoo & any small film ever made in Tollywood.

While #KobbariMattaTeaserLaunch was trended in Twitter, now the hashtag #KobbariMatta is being trended on top in the social blogging site. Many say, Sampoo is back with bang and hoping Kobbari Matta is going to be yet another hilarious entertainer from the spoof star.

Many celebrities instantly tweeted and praised the teaser. Here are few tweets of celebs:

Sai Dharam Tej: “Thank you @sampoornesh babu for giving me the opportunity to launch the worlds longest teaser   . Thanks once again.”

Priyamani: “Guys do watch this sooooper trailer by @sampoornesh 's new movie!!!!!sampoooooo!!!all the best for the movie!”

Directed by Rupak Ronaldson and produced as well as written by Sai Rajesh, Kobbari Matta is slated for release soon. Let’s wait and see how many records this movie is going to break at box office!