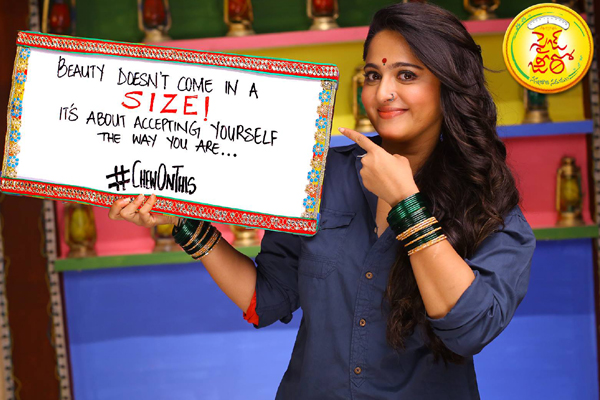 “Size Zero” team takes over social media with their thoughts on controversial issues that affect us all.

“Size Zero” is an upcoming romantic comedy starring Arya, Anushka Shetty, and Sonal Chauhan. The film is being produced by PVP Cinema and directed by Prakash Kovelamudi.

The first look posters have revealed that for this role, Anushka Shetty will be donning a larger than life avatar. Given these posters and the film’s title, it can be assumed that the film addresses issues regarding physical appearance and self confidence in the face of societal pressures.

Emphasizing this underlying theme, members of the cast and crew have taken to social media to share with us their thoughts on issues that are of importance to them personally.

Almost in response to the recent comments regarding her look for the film, Anushka has shared that “beauty doesn’t come in a size... [that] it’s about accepting yourself the way you are. #ChewOnThis.”

Whereas Sonal has come out with a daring statement that she loves exercising whether she is thin or not The initiative, evocative and inspiring as it is, is bound to strike a chord with fans and audiences.

There is also an interesting contest that will be revealed to all the fans shortly.

Insider information is that the music of Size Zero is bound to be a chartbuster and will be released in the first week of September. Size Zero has completed its shooting and post production work is going on at a frenetic pace to meet its deadline of an October release.